Huis Ten Bosch is known as one of the biggest theme parks in Japan. In addition, this theme park is sort of a Dutch Disneyland, with the whole idea being a recreation of an old Dutch city.

Huis Ten Bosch holds “Kingdom of Light” as an illumination event every year. Their Christmas light extravaganza runs from November into March and has millions of Christmas lights. In other words, this is the best time to visit Huis Ten Bosch. If you are planning a trip to Kyushu around Christmas & New Year, you may want to visit this spectacular winter wonderland!

After research, I decide to take my family (2 aunts and my mom, average age 65+) to Kyushu for the New Year holidays. And, where else can you enjoy a classic new year eve celebration with music, fun and fireworks? Huis Ten Bosch come into my head. Not only this place is like an adult’s Disneyland, but also a memorable, family-fun way to celebrate an awesome year of fun.
Read more info about Huis Ten Bosch. 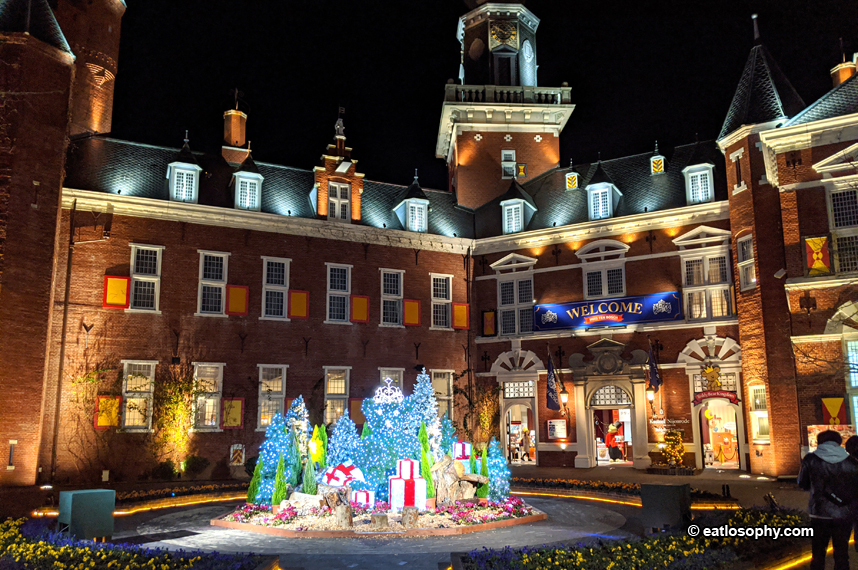 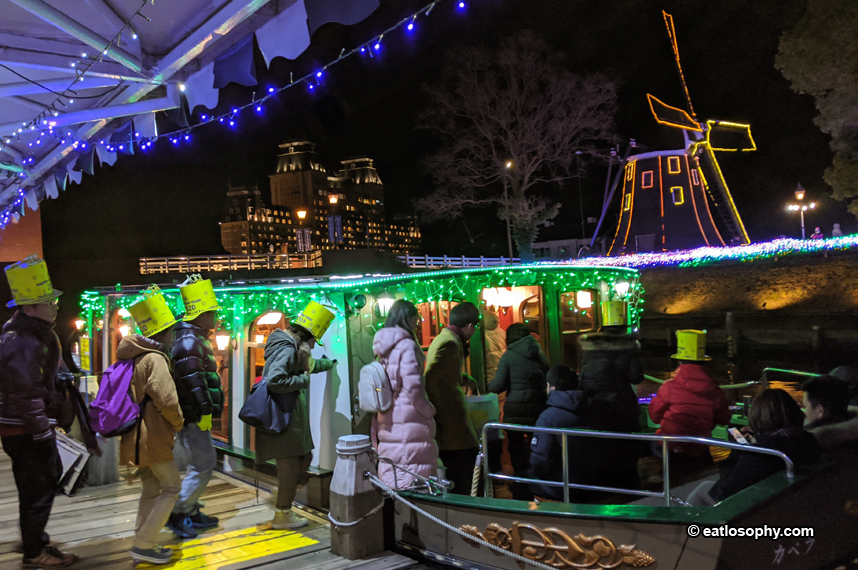 Waiting for the Canal Cruise

It can’t be Amsterdam without Canal tours

We arrive the park around 10pm and don’t have to wait in line for too long. The canal is covered with rainbow colors in the evening and when canal cruisers pass, illuminated fountains are sprayed. Meanwhile, the outside weather is about 1-2 celsius degree so it’s nice to stay inside. 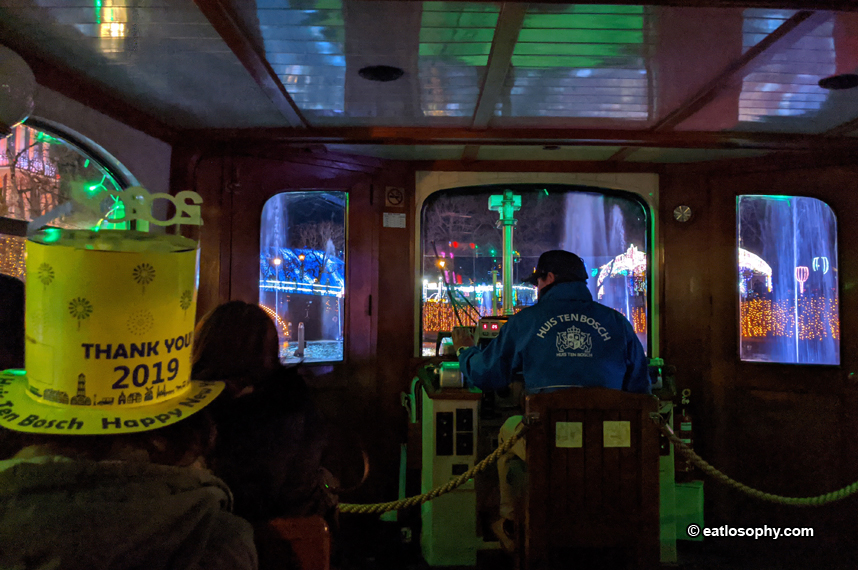 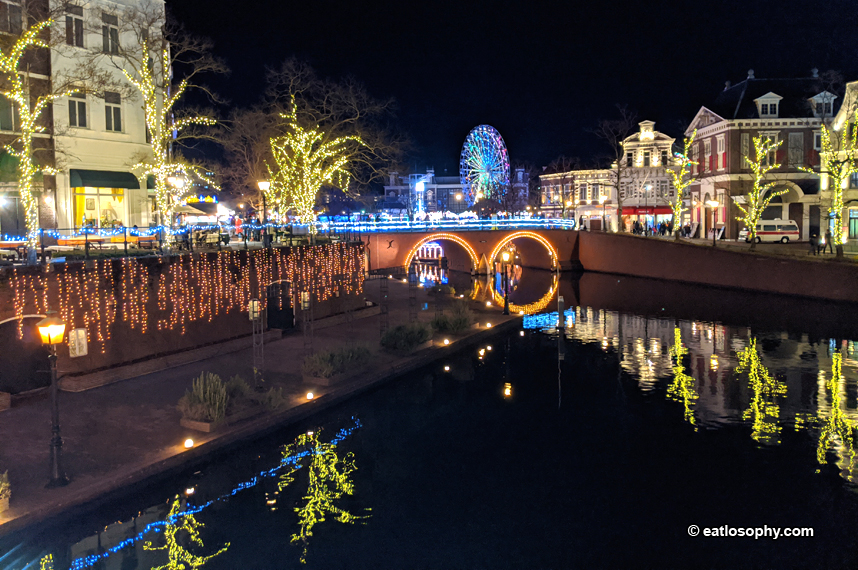 Good outdoor seating area to eat and enjoy the view. 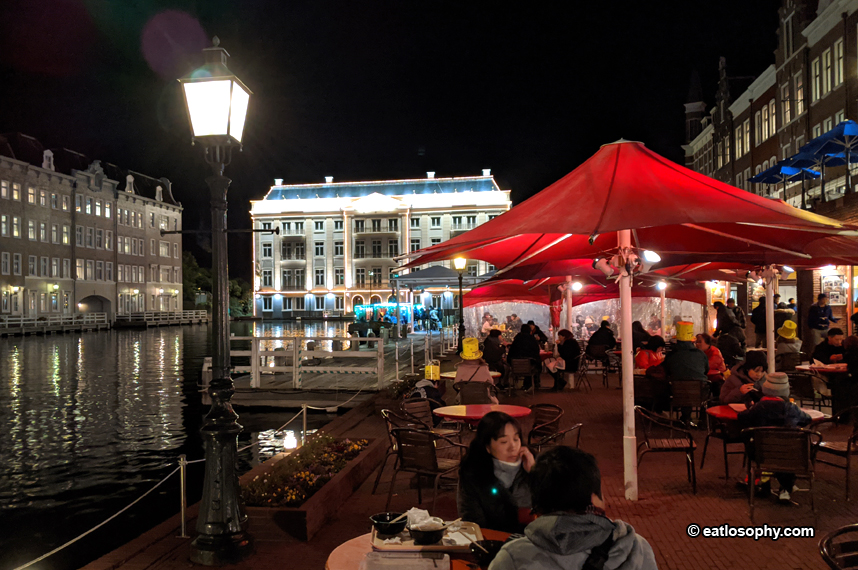 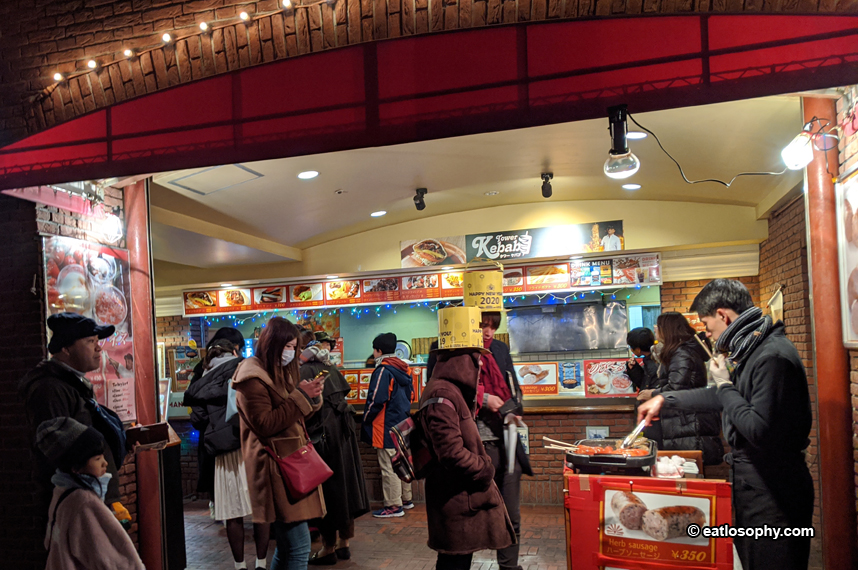 On New Year’s Eve, there is a live concert with DJs and Japanese artists at center stage, which leads up to a countdown to midnight and fireworks celebration. At midnight, 8000 fireworks launched into the air over the water. This is the largest New Year’s Eve fireworks in Western Japan. 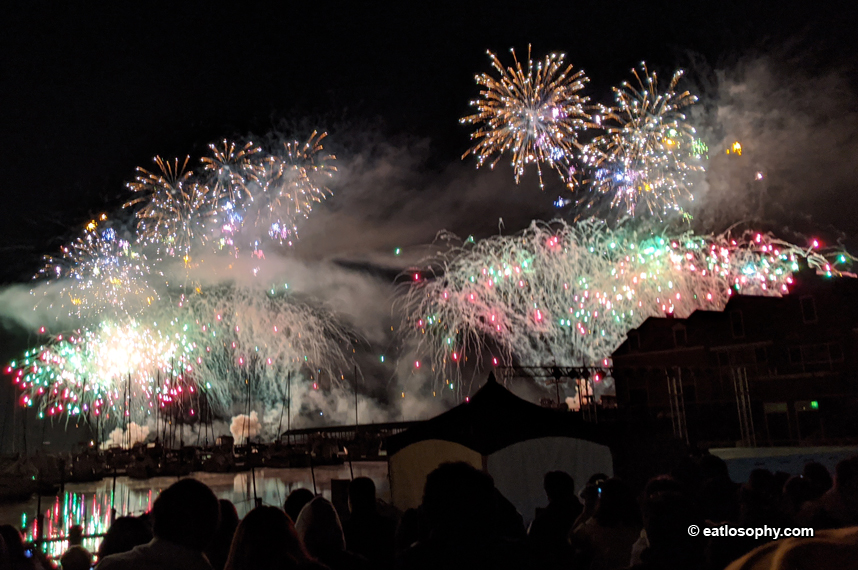 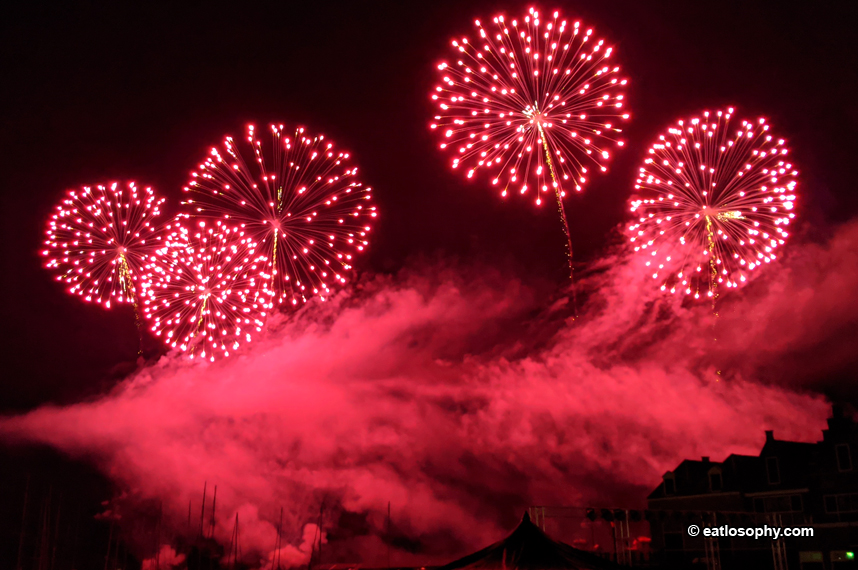 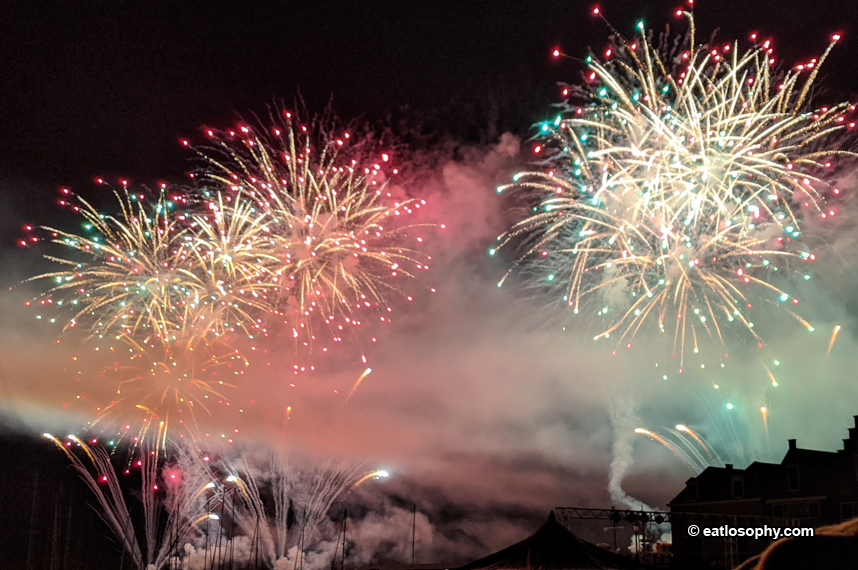 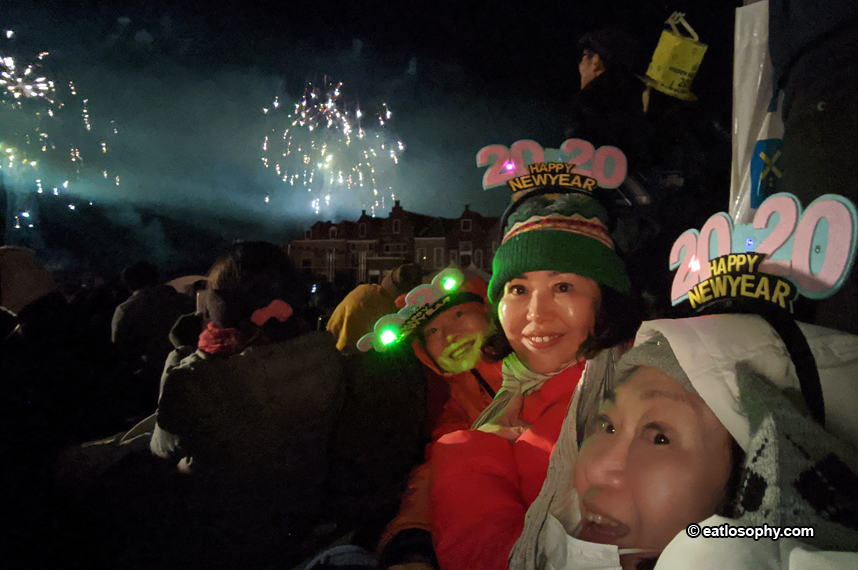 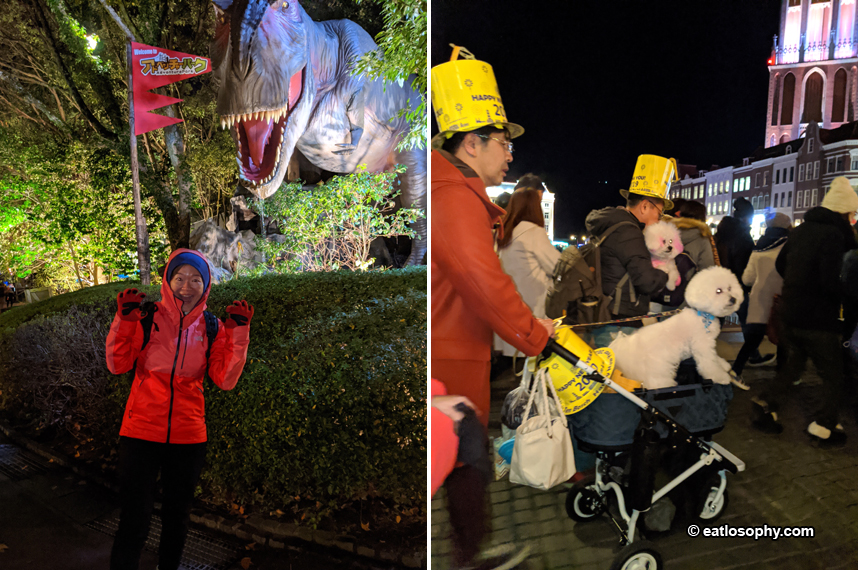 The tower is the landmark of Huis Ten Bosch. It is beautifully lit at night. 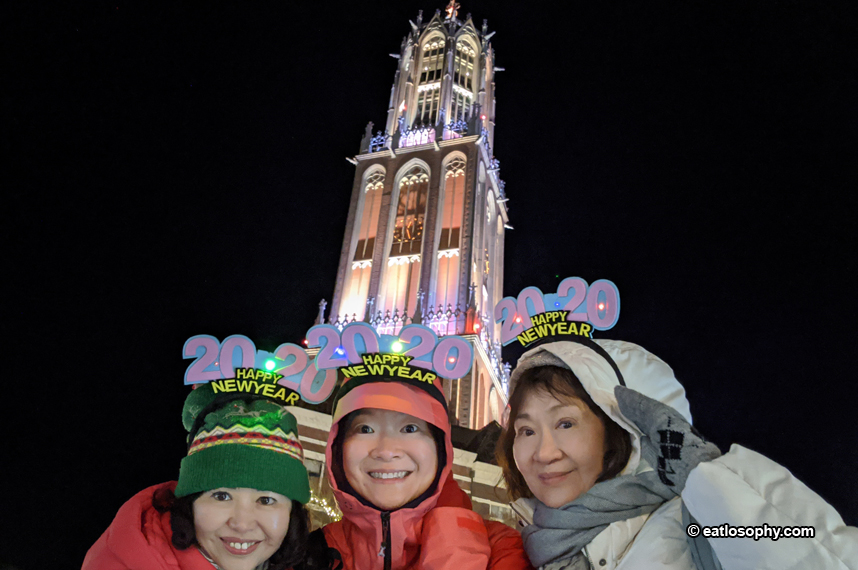